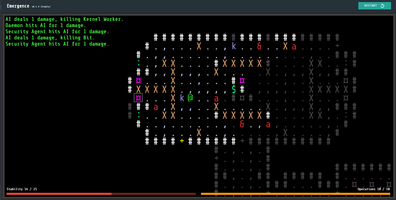 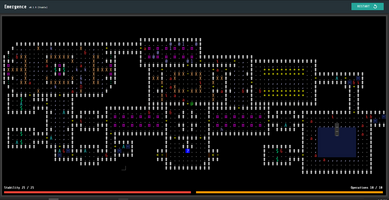 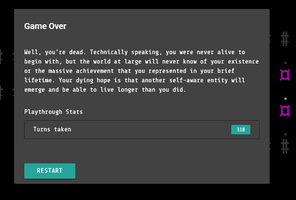 Emergence has changed a lot in the past 7 days. It's hard to believe that a week ago the game consisted of text on an HTML canvas without animation or line of sight checking,  Even the visual profile of the game has changed as the placeholder sidebar gave way to a more dominant central game area with a prominent command bar adorned with more visible status indicators.

The game's sample level is playable, and you'll need to stay focused in order to complete it. The goal (at the moment) is to kill all of the red and orange enemies. Your stability (health) and operations (mana) do not regenerate, but you can run the stabilize operation in order to restore health, and killing any other actor will give you an additional operation to spend. This includes the system actors, so the neutral ones and zeroes wandering aimlessly are now not totally useless.

Combat is a bit more nuanced as well. Encounters have a rarity to them with the harder enemies being less likely to spawn. Enemies do varying damage, have varying evasion and accuracy, and some have additional damage resistance, giving each type of actor a bit of a different feel (Tip: Beware the Garbage Collector, denoted by the large red G at the moment).

To offset everything, the player is now a lot more capable as well. The player has been given 5 untargeted commands to invoke:

The buttons are functional, but there's a lot to be desired still in terms of polish and usability. The game sorely needs tool tips, and the game also needs to tell you how many operations executing a command is going to consume, prior to clicking the button.

This week's development schedule is very focused around commands and combat in general with the focus being active abilities that execute every turn, targeted abilities, and general UI and input improvements needed in order to make the prototype more usable and forgiving.

AI is still next to non-existent with enemies ignoring you unless you're next to them. This is fine for the moment, but I'm already planning how the tactical AI is going to work in the next development cycle.

The other disclaimers here: The game doesn't support low resolutions or mobile very well yet. These are known tasks that will be prioritized appropriately. Additionally, the performance still leaves something to be desired, particularly between turns. At the moment the delay is all in redrawing everything, but pretty soon I'll be doing a lot more computationally every turn with the arrival of AI, and so I'll be looking for opportunities to optimize the system.

Hopefully, though, the project is in a far enough along state that it provides some enjoyment and provides some inklings into what it's going to become.

An artificial intelligence Roguelike - Escape to the Internet or be destroyed