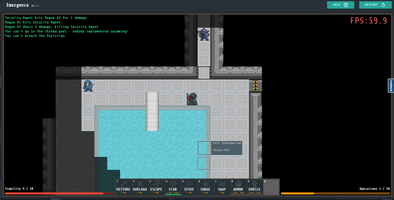 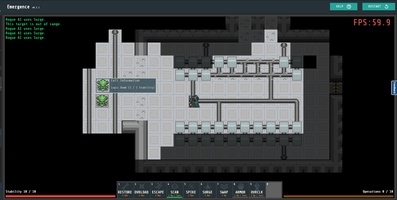 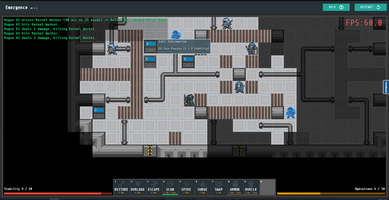 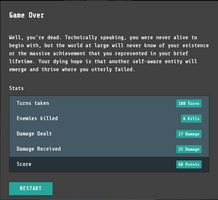 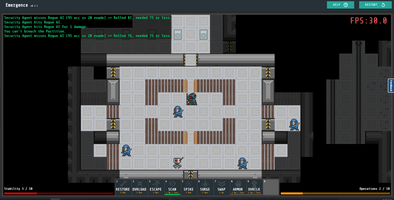 This release, now live on Itch.io, is mostly "what you see is what you get", with the sudden advent of non-ASCII graphics, but a few additional improvements have been made that might be of note.

First of all, there's the graphics. And yeah, that's a big deal. While I loved the charm and computerized ascetic of the ASCII characters of prior builds, it's not as accessible to new players and it's quite intimidating. I do want to bring back ASCII mode as an option, but for now, the game will use these graphics.

Second of all, you'll notice that the command bar now has icons and a few extra letters per command. Both of these improve usability and feature discovery, which is important for players looking to learn the game or give it its fair try.

Third of all, tooltips for the individual cells / tiles in the map now include a version of that tile. This helps cut down on visual clutter and also highlights which cell the tooltip is for.

A few commands have been tweaked for better balance. Most notably, the three targeted commands (Surge, Spike, and Swap) all have a maximum range now. This is a direct change as a result of user feedback that being able to attack enemies from across the room cut down on the sense of danger. In the long term, enemies will be getting ranged attacks and better AI, but for now, this helps address that concern so it gets included.

As far as the artwork goes, these are mostly placeholder graphics for now to help prototype a game and communicate an idea, but some of them may wind up being close to their final versions.

The walls all have an interesting "waffle board" pattern to them with many connections to hidden walls. This is a side effect of me modifying my placeholder game map to support a more destructible environment. The procedurally generated levels will not suffer from this problem to this degree.

Next up: I'll expand the interface changes to cover menus, particularly the inventory menu.

An artificial intelligence Roguelike - Escape to the Internet or be destroyed